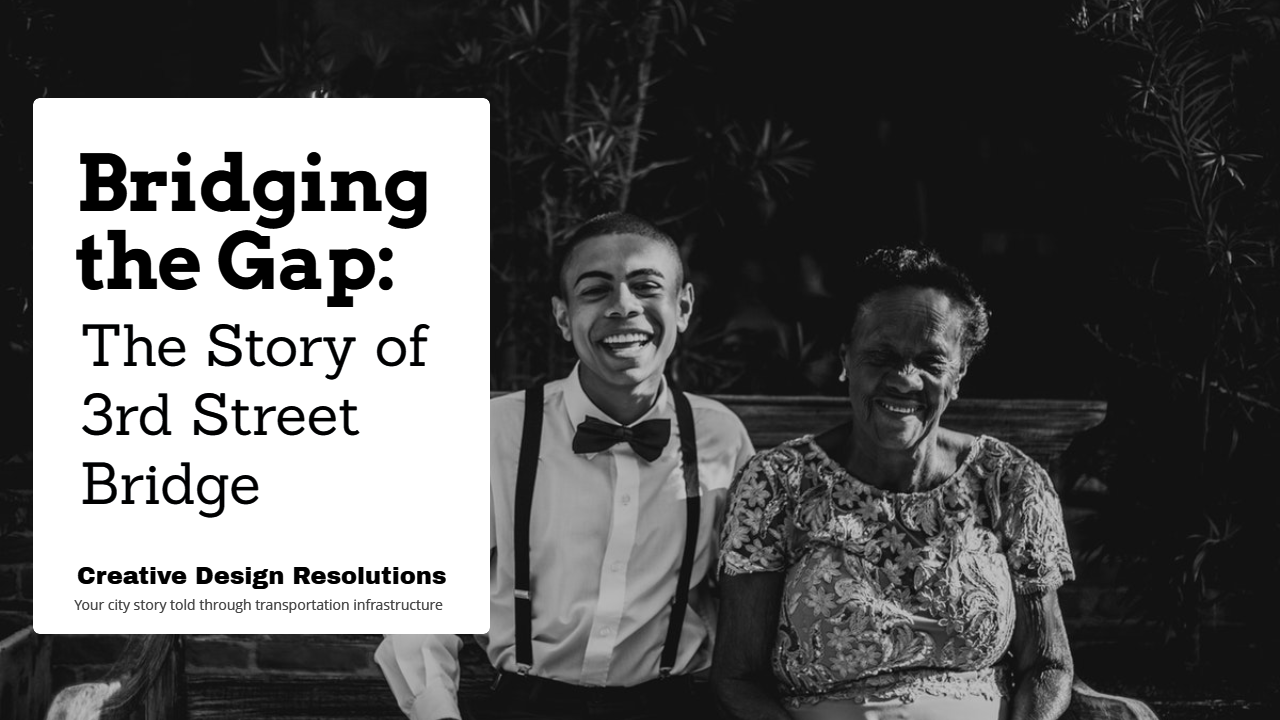 Everyday, we build bridges in America that are designed to last 60 to 75 years. But most of these bridges look very much the same, sometimes overly imposing but plain at best. Consider, however, this food for thought: Each and every city has its own unique history – its own story. Why not add a piece of this story into your structures?

This is exactly what we do at Creative Design Resolutions (CDR). We know how challenging it can be to get the community excited about roadway and bridge projects even if they will be regularly and intimately interacting with these structures. This is why incorporating aesthetics into bridges, highways, and pedestrian facilities is so important – because it reflects not only the history of the place, but also on the community’s vision and aspirations for the future.

We help you get rid of those large, monotonous structures and get the community engaged around your projects through the use of contextually relevant, high-quality aesthetics. This new chapter in transportation design history will inspire future generations by telling the story of your community, city or state (remove extra space) through visually engaging infrastructure design.

CDR’s mission is to inspire the communities across the nation by changing how they view, experience and interact with infrastructure. We have devoted our work to telling those untold stories to those who care to learn about it … and when told in the language of aesthetics, most will listen whether or not they realize it!

Steven Weitzman is an American public artist and designer known for his figurative sculptures, public artwork, and aesthetic designs for roadway and bridge infrastructure projects.

After teaching himself to sculpt clay and carve wood, Weitzman began receiving commissions for his work from city governments and municipalities across the United States. In 1998, Weitzman created CDR to focus solely on highway and transportation projects.

Believe it or not, this is our mission.

To help cities across the nation tell their unique story by enhancing and beautifying their communities’ roadway and bridge projects with aesthetic designs.

At CDR, we know that getting the community excited about your roadway and bridge projects can be a daunting task before even adding aesthetics to the conversation. From experience, however, we find that integrating the community’s histories, visions, values and aspirations into these projects brings significant pride to your city and will inspire and resonate with future generations for years come.

CDR’s modular designs allow our clients to reconfigure a handful of patterns into endless combinations to create miles of unique designs that can be reused in different ways across multiple projects.

Our Vision for the Future

In addition to designing roadways, bridges, pedestrian facilities and corridor studies that are safe and functional, we’re looking ahead. Smart roads and cities are the future – that is why we are seeking partners to create energy-generating highways using Piezo electricity, Solar and Wind technologies. Smart infrastructure will help cities become more efficient, save money and even help save the environment.

CDR specializes in aesthetic treatments and designs for bridges, highways and pedestrian facilities. For each highway or urban environment project or master plan, we develop context-sensitive design options that are appropriate for the specific project.

As an essential part of our process, we produce accurate drive-throughs, 3D computer modeling, specifications, plan sheets and narratives that show the stakeholders what the project will look like once constructed.

2019: The Southgate Virginia Tech bridge was awarded the 2019 Engineering Excellence Award by the American Council of Engineering Companies (ACEC)

2015: The La Cholla Bridge project was awarded The Public Works Project of the Year for Transportation Projects under $20M

2015: The La Cholla Bridge project was recognized for partnering excellence by the Associated General Contractors

2010: The US-77 Bridge over I-35 in Norman, Oklahoma was named the “Highest Quality Bridge Structure in the State“ and was given the 2010 Pharaoh Award

The statue of four-term mayor Marion Barry is unveiled Saturday

The Bronze and the Spirit: A Sculptor’s Vision of Legacy

County’s $21.6 million bridge project will be its biggest ever

Weitzman is most notably known for the Frederick Douglass sculpture installed in the United States Capitol in 2012; the 1,600 square foot concrete terrazzo mural, ‘The Belvedere’ installed at National Harbor in Maryland, the bronze statue of DC’s beloved ‘Mayor for Life’ Marion S. Barry Jr. installed outside of the John A. Wilson building on Pennsylvania Avenue in Washington, DC.